The interview.. Dylan speaks with Pete

Dylan Harvey is an independent film maker who hopes to make a movie based on Russell's festival adventures at some future date. He interviewed Pete in 2014. 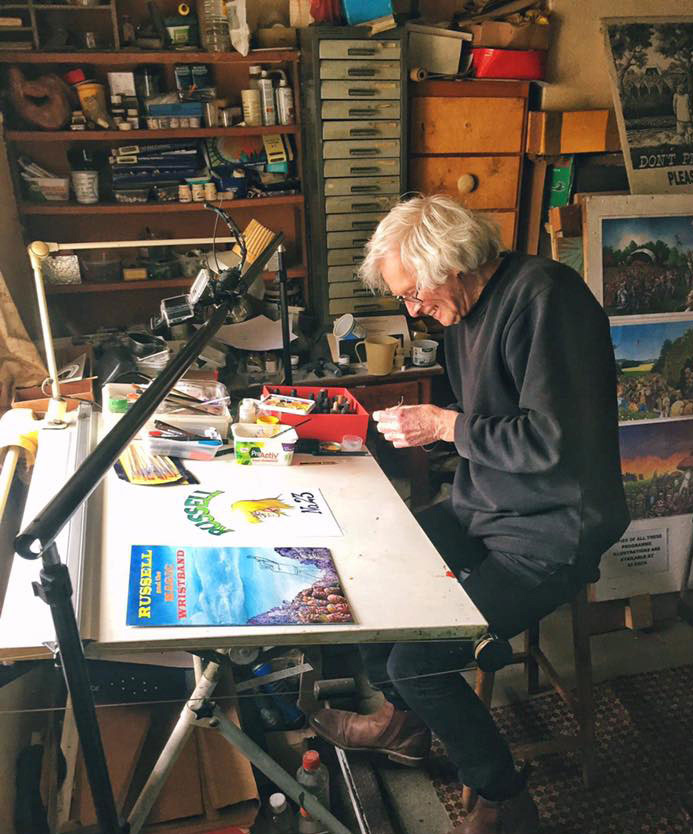 Dylan: Right, so, let's start with the basics... Who are you?

Pete: Hmm. Not sure. Can only really be answered on my death bed, supposing I have the time, ability and inkling to do so but here are the basic facts: ...Actually, I'm giving this one a miss. At the age of 17 I'd have loved to answer it but nobody bothered to ask. At 70, it's way too much!

D: Fair enough. So, who is Russell? Where does he come from?

P: I've always had a slick answer for this...'Russell is my 4th child and he lives in a bedsit in my head'... But this was more to avoid the question. Basically, he is my attempt at an everyman figure.

P: I'd have to say that any resemblance is the result of my own narrow and subjective idea of the 'common man'. He is obviously not me...he has never shown any desire to write or draw comic books, neither has he displayed the creative ability or self discipline required.

D: So getting back to the inspiration behind Russell?

P: Well, the opening scene in the Saga, the pub full of paranoid drinkers, was really pre-Russell. He was just a convenient outsider without a name... (Not exactly Clint Eastwood though!). ...The inspiration came from the place rather than persons. At the time I was Artist in Residence in South Normanton, A large pit village in Derbyshire. The locals were very proud of the fact that it had once been included in the Guinness Book of Records as having more pubs per head of the population than anywhere else in Britain... or maybe England... something like that. They were also proud that at one time it had also been regarded as the hardest pit village in the Notts/Derby coalfield. Although that can't be verified as it was never listed as such in the Book of Records.

Anyway, in the 1970's it had an alarmingly tribal pub culture and a degree of tact was required when drinking for the first time in any or all of those pubs. The two-page strip was first drawn for the South Normanton Community Newsletter and the unwilling intruder was called Jay, not Russell. He also had a long nose. I later found out that I could not draw that nose from the front and so altered it to the snub nose, which seemed to make him look more personable. As it turned out, I couldn't draw that from the front either!

My inspiration came from 2 sources:

The style came from the wonderful 'Fabulous Furry Freak Brothers' comics by Gilbert Shelton and his collaborators. Back in the 60's and 70's, these comics provided a kind of male bonding exercise for stoned hippies. Shelton was a master of the punch line and we knew them all, so you could sit down with a total stranger, share a doobie and swap favourites. I wanted to create the English equivalent. The fact that Russell comics have also appealed to readers who are neither hippies or male (and even in rare cases, stoned) is a bonus.

When I moved to Devon to work on a community art project, I became involved in the art of clowning and the tradition of Comedia D'el Arte. As I practitioner, I was crap. But it did help me develop Russell as the innocent abroad, the common man as clown. Of course that wasn't how he remained, but it was a starting point and kept the whole thing going while I discovered who he was.

D: Is he based on a real person?

P: After the last answer I ought to deny it, but actually, there were two friends who both provided me with early inspiration. One was a guy who always got things slightly wrong. Having wandered into a semi-hippy lifestyle by accident, he found his own ineptitude sometimes amusing, sometimes mortifying. He ended up later as an unqualified success in a mainstream career. He would be horrified to find that he had contributed to the character of Russell! The other friend was more of a cool dude who led something of a charmed life. He made a serious contribution to Russell's lightness of foot.

In a way, they were the kind of light and dark sides of Russell, though I honestly don't know which was which. But together they helped me create a clown who seemed to be a rounded person as opposed to a cypher. Yet he is a cypher in a way. He has no art, no sport, no religion, no science and very little sign of work. What he does have is numerous responses and reactions as well as occasional ideas and moments of illumination. Plus an occasional dose of common sense.

He's still a clown though...

D: Tell us about the world in which he lives...

P: A set of dimensions adjacent and similar (but not identical) to our own.

D: The festival scene is a big part of the comics. Does this all come from personal experience?

P: Yes, I'm afraid so – give or take a bit of artistic license. Plus inaccuracies, lies, exaggerations, fantasies and... um... something else that I can't remember.

D: So how did you get involved in the festival world then?

P: I don't know, it just sort of happened. If it ever did happen at all. The number of people who consider me to be 'part of the scene' must be massively outnumbered by the amount of people who say 'who's he?' Plus, to be honest, I don't feel that I am most of the time.

(He says this despite the fact that he designs the posters and programmes for a number of today's big festivals and is ever present managing his comics stall too!)

D: So what is your favourite festival story/myth?

P: I ain't telling! You'll have to wait for a future comic. This stuff is my future income!

D: Have the Russell comics affected the way you view festivals and life in general?

P: Right, the chicken and the egg question... Well, they were supposed to affect the way other people view festivals and life in general, though that wasn't their only purpose... But I expect so. At the moment I'd say the only real lesson is:

Don't waste your life making comics about longhaired losers if you want to make a reasonable living. But it's not a lesson I've absorbed yet and it could still have a happy ending anyway. Jury is still out.

D: Any future plans for Russell?

P: Several more comics. A full colour collection that will include a number of Russell strips. Also a short series of comics, maybe a trilogy, entitled 'Russell and The Magic Wristband' which will take a broadly inaccurate look at the history of the festival scene, amongst other things. I am hoping to start on these later this year.

Then there's the Big Trip Travel Agency 7, completing the 'Same Old Story' serial. I also have fantasies of doing Part 3 of 'Saga of a Peaceful Man. And then there's more, but you can only live for so long... Anyway, never mind me. What plans have you got for Russell? Are you going to make him work for a living and make my declining years prosperous and comfortable? Eh?

D: Er... I ask the questions, if you don't mind... But yes, plans are afoot to develop Russell for the big screen, although right now we are putting together a package to present something of Russell's story for those little screens in everyone's pockets. Unfortunately the smaller the screen, the smaller the budget. So you may need to decline a bit further before you can enjoy any prosperity or comfort from me. Sorry about that.

P: I just hope that I don't end up wasting my life making films about longhaired losers.